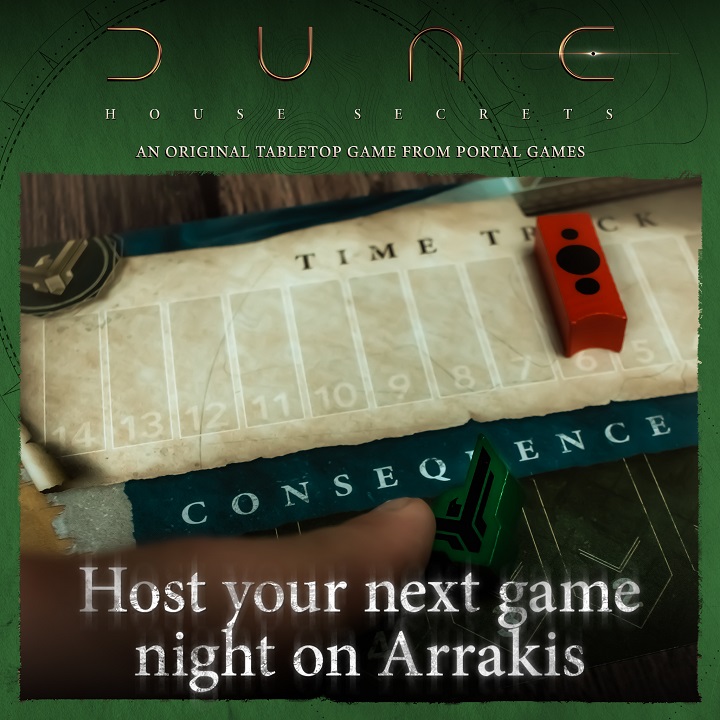 Detective: a modern crime board game was all about putting players in the shoes of characters from procedural TV shows like CSI: Crime Scene Investigation. Players take the role of law enforcers and detectives. They visit the Lab to examine DNA samples, they visit Court and City Archives to dig in old files and cases, they visit Richmond PD to question suspects and witnesses. The game comes with a small board to help manifest this simple structure - Lab, Richmond PD, Court - this is your terrain, this is your playground, this is your procedure.

Dune: House Secrets invites player characters to Tel Gezer, a small city on Arrakis they never visited before. They are members of resistance on a secret mission. There is no structure, there is only unknown, there is only the fog of secret war.

In Dune: House Secrets, I decided to throw out the board as players know it from Detective to remove the safety of well-known locations. I gave them the map of Tel Gezer, a big paper map like in RPG sessions. I marked on it 26 different locations - tavern, palace, landing pod, gallery, market, all different places—the whole big city, the city that is unknown to the newcomers. Instead of solid structure from Detective, they are given a handout with things they need to explore and places they need to learn about.

It's a simple design change. Remove the board with four familiar locations and give a map with 26 unknown ones. Suddenly from the confident law enforcer, you turn into a traveler that visits a new place.

In Detective, at the beginning of each game, characters add their ability tokens to the pool. This represents their skillset and how they can add value to the team by excelling in some areas. These tokens are then used in the game to dig deeper into some cards and learn more about certain plot elements.

One of the characteristic elements in Dune is Fremen's frugality, their sacred care for water and spice. They are quite the opposite to today's society in which the word waste goes along with every day. I wanted to show it in the rules, both the scarcity of resources and the respect to what a person has. The ability tokens received one simple tweak. Once spent, they are gone. They don't replenish at the beginning of the next game.

In Detective players are law enforcers. Confidence is their unlimited resource. They can visit crime scenes, they can question witnesses, they can check police databases, they are in control of the situation.

In Dune: House Secrets, you play a rebel fighting against evil Harkonnens. You act undercover, you run in shadows, you watch every step you take, and your every action is a risk.

To represent that with a simple mechanism, we decided to add a small Push your luck mechanism in the game. When taking certain actions, like passing behind guards or breaking into a Harkonnens building, players must take a risk test and draw a Consequence token. We have 2 good ones in the pool and 3 alert ones. When you draw the red one, the Consequence track moves, and if it ever reaches the final spot, the resistant forces are in trouble.

It's a simple mechanism added to the Detective system, but it adds this moment of uncertainty, the split-second-long thrill when you draw a token knowing that you are just doing something very risky...

These are three small changes, small tweaks in the Detective system we introduced in Dune: House Secrets that allowed us to change the feel of the game and help players immerse into Dune. They are no longer detectives. They are rebels in the city of Tel Gezer.

In the second part, I will discuss how we approached the Antares website and adjusted it to the world in which computers do not exist...