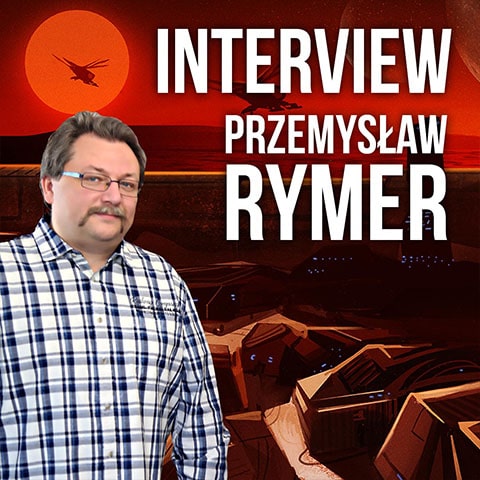 As the last article, and as a big final for our #BoardGamesThatTellStories week we want to present you today an exclusive interview with Przemysław Rymer, main story writer for Dune: House Secrets!


1. We have to start from the beginning, of course. Do you remember your first encounter with Dune?

Przemysław Rymer : I was 11. I think it was a fictionalized fragment of Lynch’s movie script that was published in a printed newsletter of the Polish Fans of Fantasy Society “Sfera” in 1985 or 1986. That was quite an experience. There was not a lot of fantasy literature on the market, western authors in particular. It couldn’t be published for political reasons, or someone didn’t want it published. Most critics and “connoisseurs” despised it, and deemed it as nothing more than children’s stories about robots. The stories considered worthy of publishing were about the existential problems of an alcoholic writer alone against the whole world, struggles in trenches, or memories of Treblinka. These were different times.

Then I had to wait a year in a queue in a public library to borrow the first Polish edition—two volumes translated by Marek Marszał. That’s how my long romance with the series started, interlaced with a divorce after Łoziński’s translation. Some of his interpretations of proper names were just too much.

2. The book includes an enormous number of plotlines, characters, and layers of political intrigue. When you began working on the House Secrets plot, did you have to choose from dozens of compelling options, or did you know from the beginning that you were going to work on a plotline revolving around a secret of the Atreides?

P.R.: No. I did consider different options. One of them was of a more detective nature. After all, it was supposed to use the mechanics of the Detective. But I scrapped this idea, knowingly. There were a few reasons, one mundane: the book doesn’t elaborate on the Arrakis court and law enforcement systems. Herbert didn’t need that. That wasn’t what he was writing about. It created lots of difficulties. I could “go around” them, of course.

I could, for example, create a character inspired by an Anglo-Saxon coroner, who was initially a royal official, and apart from taking care of the finances, they also investigated unusual death cases, among others. The only known official in the book is Liet-Kynes, Judge of the Change. But there were other complications, too. Besides, it was supposed to be a game and a story for a broader audience, not only the hardcore masters of puzzle-solving. An adventure game. The movie itself is more adventurous and straightforward than, let’s say, House of Cards with its political intrigues. The novel also pictures gruesome atrocities without going into much detail.

3. What does the research to write the plot look like? Could you briefly describe the process?

Detective was supposed to roughly imitate the work of an investigator. There’s overtime and a bureaucratic fight with the system. It was also based on real systems that could support detective work. Otherwise, it was something completely new. The search for the game’s form also influenced the presentation of the plot. In the case of Vienna Connection, it was the broad knowledge of the historical era on one hand—from fashion and cars to social and political events from that time—and the research of the documents and other materials concerning the secret intelligence war on the other. Knowledge of the activities of secret services and terrorist groups. Searching the archives of the CIA, FBI, or the Institute of National Remembrance. Reading specialized magazines.

Dune is a made-up world that has existed for half a century. It has its cannon, fanbase, admirers, malcontents, opponents, and all those in-between.

I had an idea for a story connected to the Fremen rebellion fighting the Harkonnens for a few decades, of conflicts between different guerilla factions sometimes fighting among each other. That’s how I created Azrakhel, the Red Leaf. There was still a matter of fading them into the events depicted in the novel and the movie but on a different level. That’s why I had to imagine how it is to be an inhabitant of Dune—but not the prince (we already know this story)—a street vendor of the spice, the most valuable substance in the world, and highly addicting drug, a beggar fighting for a sip of water, an adventurer, or a mercenary working for local big shots. Dune was a destination for people who simply wanted to make a pile, similarly to the cities of the Wild West, engulfed in a gold rush.

If you look at the events from the movie, there are multiple unsaid individual tragedies behind the scenes of a great conflict. There were soldiers left at the mercy of the enemy, citizens living under an oppressive and brutal government, artisans, merchants, prostitutes, and dealers… of drugs. Disabled people were expelled from the Fremen sietches because they were useless to the community. Lesser gentry was blackmailed into submission. These are the backgrounds of Dune. It was a challenge to find a free space in a complete story. I think I’ve found that space in a few sentences. And the proof can be found in the text of Frank Herbert’s novel.

4. While working on House Secrets, were you planning the next parts of the trilogy right away? How much did you know? How much of the plot and the intrigues of the consecutive parts were ready?

P.R.: Yes, the story was created as a whole from the beginning. The consecutive parts are connected, not by a multi-layer intrigue, but… Hm. Okay, maybe they are a bit connected. I wouldn’t be myself if they weren’t. But it’s more about the stories of player characters, and people from their surroundings intertwined in the events known from Dune and other novels. The main story is silent about them. But someone had to hunt Baron’s servants in dark alleys, someone traded weapons and bribed the Guild so it would turn a blind eye on the Southern Pole. Someone had to form alliances… That’s my story, prepared with respect for Herbert’s masterpiece. A story of people Paul Atreides could do nothing without.

5. Your stories: Detective, Vienna Connection, and Dune: House Secrets alike, are full of references to movies and literature. Przemysław Rymer’s favourite writers are…?

P.R.: I love all good and engaging stories. Romances, crime fiction, a slice of life, action. I’m a book addict. Right now, several authors are constantly appearing on my reading list. I think that one or two decades ago I would name other writers.

In my opinion, Henryk Sienkiewicz is unmatched. He’s a master of words. Brilliant use of Polish, and passionate poetic descriptions. Usually once a year I reread or listen to some part of his Trilogy, and I’m amazed every single time. I adore J.R.R. Tolkien’s Lord of the Rings, Feliks Kres, Diana Gabaldon, James S.A. Corey—or the duet of Ty Frank and Daniel Abraham under a pseudonym. I’d also throw in Siergiej Łukjanienko, and… Eliza Orzeszkowa’s On the Niemen. Pride and Prejudice or Wuthering Heights pale in comparison to it. Beautiful romance. Wonderful literature.

6. What are your opinions after watching Dune? As a creator of the game, you had access to some movie materials—concept arts, visualizations. Even so, was there anything that surprised you in the adaptation?

P.R.: The visual layer is breathtaking. The only thing that surprised me was the relatively short screen time of Thufir Hawat—the Atreides’ mentat and master of intrigues.

7. Thank you for the interview. We’re looking forward to the second part of the trilogy!

P.R.: I can’t wait either. There’s a lot of work ahead of us. Greetings and thanks to everyone involved in this project.

NOTE: This article is part of the #BoardGamesThatTellStories week. Visit us every day for:
Tuesday – an article about all novels that inspired Robinson Crusoe,
Wednesday – a short story inspired by the book Legend,
Thursday – showcase of photos of prototype Witcher: adventure board game,
Friday – an interview with Przemysław Rymer, writer behind Dune: House Secrets!