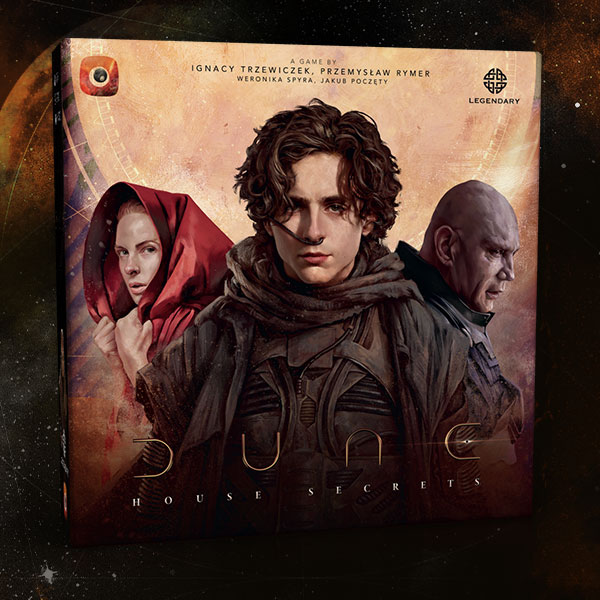 Portal Games is thrilled to finally share some exciting news on Dune: House Secrets, our story-driven cooperative adventure board game inspired by the upcoming film:

Fans can expect regular updates to the dedicated website, including exclusive news, game previews, designer diaries, and more in the coming weeks.

Adding many new Dune mechanics and features to their award-winning Detective game system, Dune: House Secrets is a cooperative, story-driven adventure game for 1-4 players aged 14+, which delivers a unique, deeply thematic experience that drops you right in the middle of the highest stakes on the harsh desert planet of Arrakis.

In Dune: House Secrets, players take on the roles of rebels who must solve a series of challenging missions with a finite amount of time and resources. Players cooperatively make decisions on how to progress the story, as they explore different regions of the world, follow leads, leverage allies, and overcome opposition of all kinds. During gameplay, players utilize a variety of physical and digital game components to steer the narrative in fun and surprising directions – a deck of cards with essential clues and plot twists, a dozen physical handouts, and a dedicated website with assorted videos and additional resources – for a truly immersive game experience.

Beginning with a brief Prologue to ease players into the Dune universe, the game then continues with three big adventures, each taking 2-3 hours to play. During each episode, players can earn experience points to level up their characters in between missions and unlock new options in future episodes. Each adventure can be played separately as a stand-alone experience. Yet should players complete all three episodes, they will unravel a master game narrative with an epic climax and lasting impact on the two future games in Portal’s planned Dune trilogy.

An officially licensed board game produced in partnership with Legendary Entertainment, Herbert Properties LLC, Gale Force Nine (GF9), and Genuine Entertainment, Dune: House Secrets is designed by board game industry veteran Ignacy Trzewiczek and written by Przemysław Rymer – both well-known for their cooperation on Detective: A Modern Crime Board Game, which has sold over 100,000 copies worldwide in over a dozen languages.

Rob 1 year ago
Take my money!!
Zinnaca 1 year ago
Oh my, this is looking GOOD! I favour Dune more than Star Wars or Star Trek and this is also soloable!!!!
Piciu12-79 1 year ago
Specjalnie dla tej gry poczytam książki z uniwersum Duna 😉
Red 1 year ago
I loved Detective series. I loved Dune books and videos. This is my money. I am full of expectations! (I do hope this game will not disappoint those, and I trust Portal for making a great product!) I'll be first in line for preorder!
Zeronumber 1 year ago
"What's in the box?" ... "Pain."
John Panagos 1 year ago
Can we have a partnership with forteller app? It is easier to buy a narrative bundle from them and just listen the scripts
Sauron 1 year ago
The spice must flow!